A tenet of history — that the Anglo-Saxons shunned all cities as haunted, and therefore preferred to live in isolated farmsteads— has been shown to be more mythical than real. After the Anglo-Saxon conquest, many Roman sites lost their importance. Some cities did indeed fall into disuse, but their decay had already set in under Roman rule. A number of stone-built Roman towns (e. g., London and Colchester) survived and had their defenses rebuilt and maintained until the Middle Ages and even later. The Anglo-Saxon kings of England laid importance upon defended sites. The long and numerous wars between the Anglo-Saxons and the Danes saw the appearance of the so-called burhs, the origin of the modern word borough. The term seems to have come from the Latin word burgus (watchtower), many of which had been erected along the German boundary of the Roman Empire. While Devil’s Dike, Offa’s Dike and Wat’s Dike were mere boundary markers, burhs were fortifications in the true sense of the word. In England the establishment of a defensive system of burhs is associated with the reign of King Alfred the Great (871-899). Owing to the Burghal Hidage (a unique Anglo-Saxon document compiled under Edward the Elder between 910 and 914, providing a descriptive list of 33 fortified burhs in Wessex and elsewhere in southern England), these fortified towns built as defenses against the Vikings are comparatively well documented. The scale and organization of Alfred’s burh system represents much more than simple ad hoc defensive arrangements, as had been the case previously. They were much more than a local and communal defense, the Burghal Hidage indicating a much clearer centralized national effort, and there was a considerable attention given to organization and detail. Alfred’s burhs represented a new, positive approach to defense, incorporating centralized planning and local communal effort. That they were successful militarily is obvious, but that the burhs were also economically and socially successful is demonstrated by the number which survived the wars and became thriving towns. Alfred’s burhs were a necessity partly because of the nature of warfare and weapons. Indeed, a highly mobile enemy such as the Vikings could not be met simply with a field army, because whenever the army arrived the Scandinavian raiders had gone. It was necessary to build fortified points for protection, and local bases from which warriors could look out for the Vikings and sally out to meet them in the field when they appeared. Oval or rectangular in shape, burhs were indeed intended to protect persons and goods, and to provide a base from which cavalry (and on the coast, ships) could operate against marauders, raiders, and Viking invaders. Burhs also provided for the control of the economy and promotion of trade, and constituted administrative centers as well as religious and spiritual centers, as the protection and defense of the Church was a responsibility of the king. They had official status recognized by grants such as the right to mint coinage. In Wessex, these fortified communities were geographically distributed so that everyone lived within a day’s march of such a place of refuge, where frightened people could hide while the tide of Viking fury washed around them and hopefully abated. Forming strongholds located in strategic positions primarily along the coast and the borders of Alfred’s lands, a number of burhs were connected by a military road called the Herepath. This ran up from Combwich, Cannington and over Stowey, along the present course of the Stowey road, across Dead Woman’s Ditch to Crow-combe Park Gate, south along the main ridge of the Quantocks to Triscombe Stone, then west across the valley to the Brendon Hills and Exmoor. The road connected a 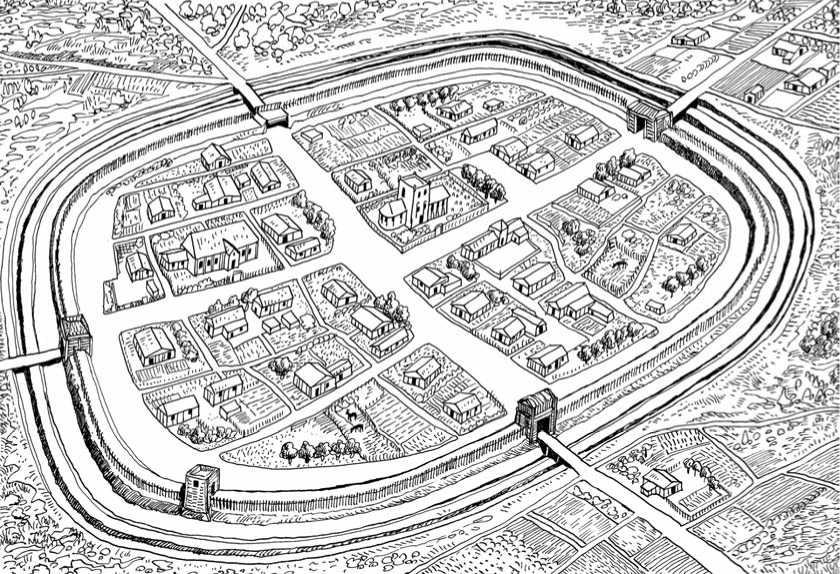 Anglo-Saxon burh (conjectured reconstruction). The fortifications consisted of a timber-revetted bank with one or more ditches. 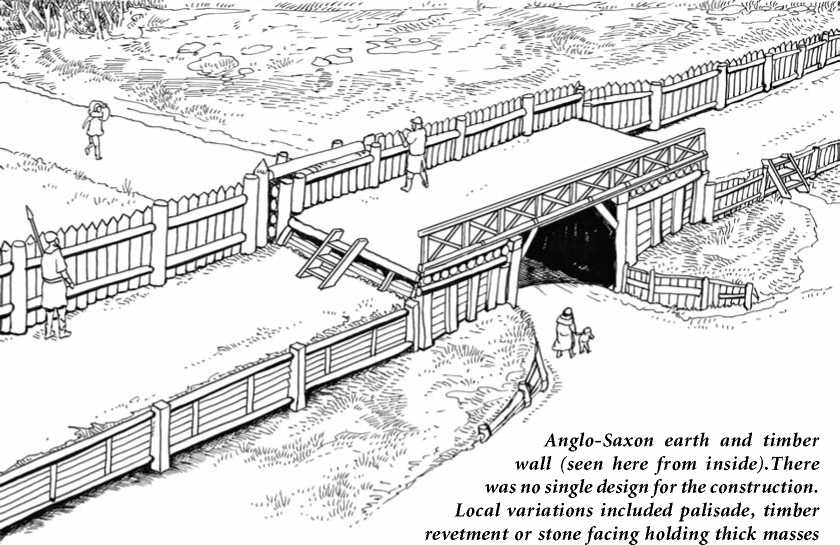 Of earth and giving stablity to the ramparts. In fact building techniques were rather similar to ancient Iron Age practices.


Series of forts and lookout posts, which allowed Alfred’s armies to move along the coast to cover Viking movements at sea and forestall any raids ashore. This shows how thoroughly Alfred protected his remaining kingdom of Wessex, once the Danish Vikings had captured parts of England.

Burhs were not built to a rigid pattern, but as local conditions permitted. Tech- 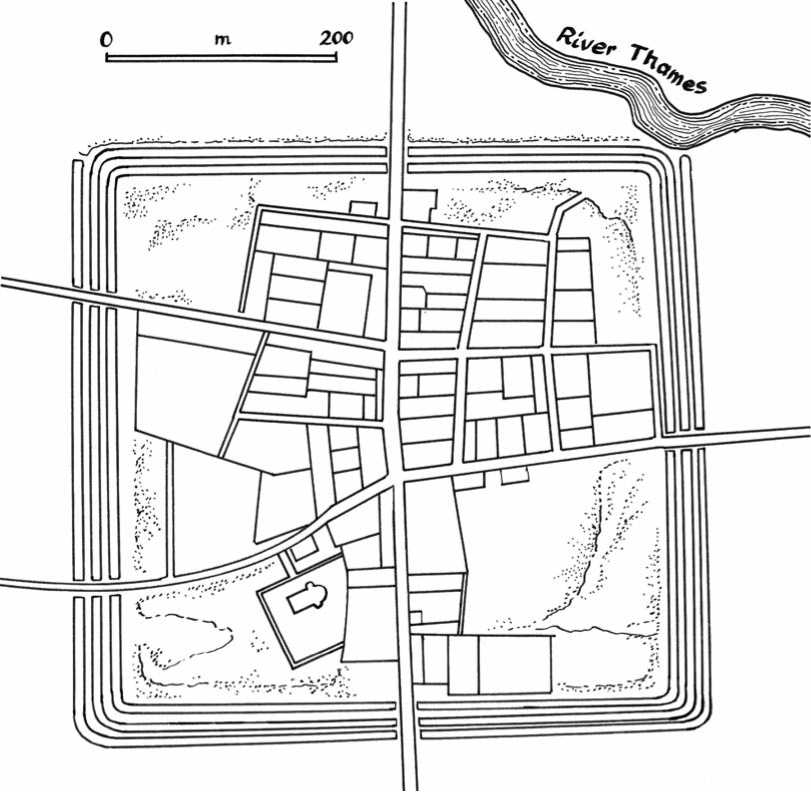 The town of Cricklade in north Wiltshire, on the River Thames, situated midway between Swindon and Cirencester, is one of the most regular examples of the Saxon burh, created as part of a fort system in the late 9th century. Built in the short period of 878-879 both to defend Wessex against the Vikings under Guthrum, and to act as an offensive to the Viking presence in Mercia, its earthwork defenses are relatively well preserved, and show particularly good evidence of rectilinear planning, being roughly 1,350 feet square. The regular layout and grid pattern of streets reveal a reuse of a pre-existing Roman settlement. The enceinte consisted of a 6-meter-wide clay bank surrounded by a triple ditch arrangement. The banks formed a rough square with sides 510-550 m long. A narrow walkway of laid stones ran along their inner face. 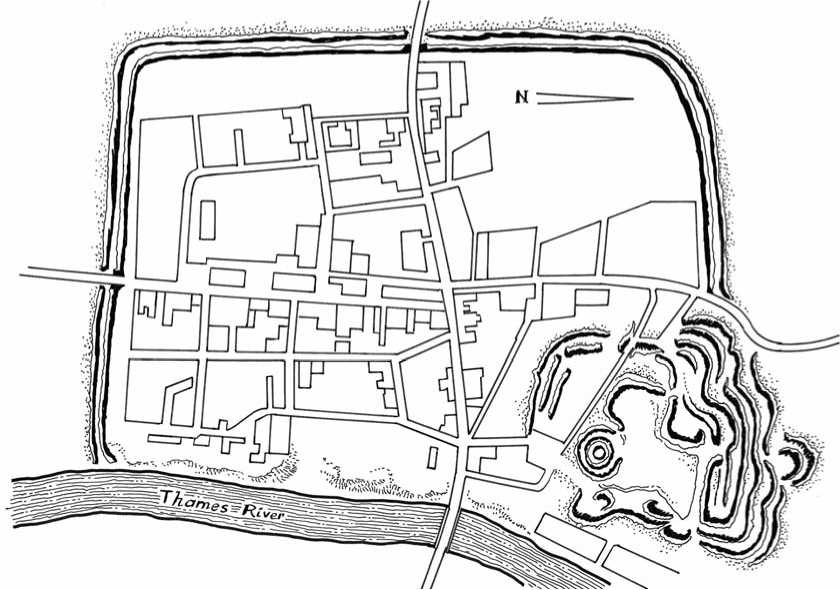 The settlement of Wallingford in Oxfordshire grew on an important crossing point in the upper Thames valley. It was first mentioned by name in a charter dated around a. d. 895. However, Wallingford had, in fact, probably been a focus of both road and water-borne communications since late Roman times. It was around this small settlement that King Alfred had a massive earthern rampart (approx. 2,500 by 1,800feet) erected in a rectangle enclosing some 41 hectares of land. Its layout was expanded over a formal street-grid system in the southern half, the most important route being the wallstreet, which allowed troops to move quickly along the ramparts. Wallingford burh seemed to have had accommodation for 2,400 men, and its first occupation may have been completely military in nature, but the population soon grew with the development of associated specialist craft industries.

Nically speaking, a typical Alfredian burh might have been a small - to medium-sized fortified town, defended by an earth wall topped with a palisade and fronted by one or more ditches filled with water when available, obviously a copy or inheritance of earlier Roman practice. Some burhs were entirely fresh Saxon creations such as Crick-lade, others were the result of following the line of earlier intact Roman defenses on the same site, e. g., Winchester, Exeter, and Gloucester (revived as a royal and ecclesiastical center in the 7th century, and as a fortified burh and planned town in the 9th. Situated at the lowest bridgeable point on the Severn River, Gloucester was for a long time an important inland port). In a few cases, even Iron Age hill forts were reused (e. g., Daw’s Castle in Somerset).

Though Alfred began the refortification of England, many sites were built by his successors in the early 10th century. Alfred’s son, Edward the Elder (reign 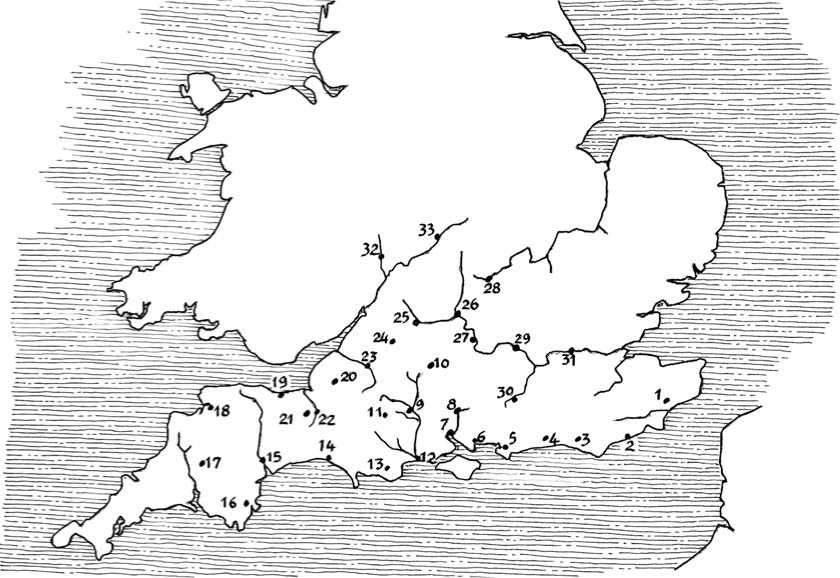 901-925), continued his father’s policy of establishing fortified towns, and he and his sister, Lady Aethelflaed of Mercia, built a new double row of burhs along the old Roman road of Watling Street, which marked the border of the Danelaw as it ran from the Mersey to Essex. Unfortunately for posterity, most Saxon buildings were constructed of earth, wood, and wattle and daub. The depredations of time and of the Danes left very few of these vulnerable buildings standing. Of the burhs that have survived as modern towns, little remains of the Saxon settlements, and only a few surviving examples have been found. Although ramparts have become gentler over the centuries and ditches shallower and overgrown with brambles, a few interesting remnants can be seen notably at Wareham, located eight miles (13 km) southwest of Poole in Dorset, southwest England. Wareham was a strategic dry point between the River Frome and the River Piddle at the head of the Wareham Channel. Founded by the Saxons, the burh, built by order of King Alfred the Great in the 9th century, was more or less rectangular in plan (c. 2,300 by 2,000 feet) with earth ramparts and timber facing rising up to 15 feet, later replaced by a stone wall. The town was a Saxon royal burial place, notably that of King Beorhtric (king of Wessex from 786

To 802). The River Frome served as a small harbor and the town was a port in centuries when boats were smaller and before the river silted up. It is interesting to note that in 1940 the ditches of Wareham were reshaped and reinforced with pillboxes to serve as anti-tank obstacles should Nazi Germany have carried out Operation Sealion, the invasion of Britain. Other remnants of Anglo-Saxon burhs can be seen at Crick-lade in Wiltshire, and Wallingford in Oxfordshire.

Below: Anglo-Saxon ceorl. The Anglo-Saxon army was known as the fyrd, made up of all fit free men between the ages of 15 and 60. The depicted ceorl (peasant) wears daily life civilian clothes, and is armed with an axe and a spear. On the left: various forms of Anglo-Saxon socket spearheads.

Opposite left: Anglo-Saxon thegn. A thegn (or thane), originally the sworn comrade of the king or war leader, was a lord who held his land directly from the king in return for military service in time of war. Thegns could earn their titles and lands or inherit them. Under 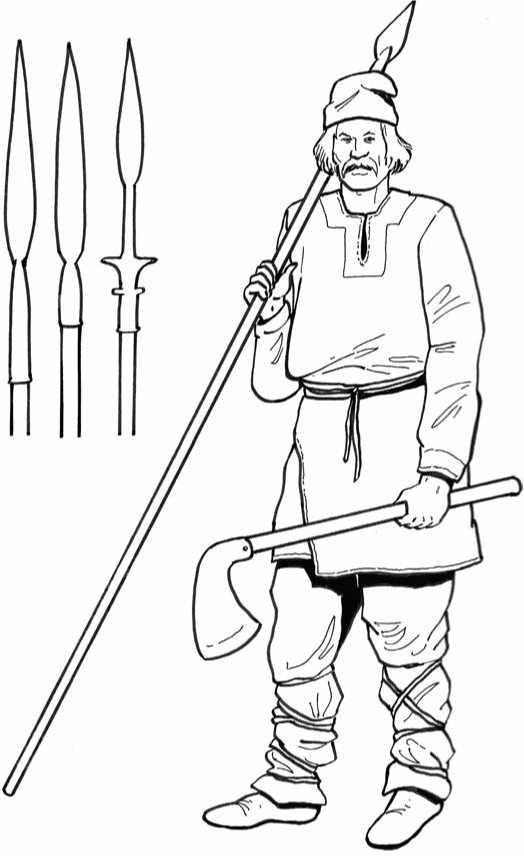 The pressure of constant warfare the more important free landholders were absorbed into the thegnly class, while the lesser ones sank into serfdom. The depicted thegn is armed with a scramasax (a single-edged sword) and a dagger. He wears a conical metal helmet and a byrnie (a hip-length, thick leather padded tunic with short sleeves), and carries a round shield.

Opposite right: Anglo-Saxon huscarl. The huscarls were the elite of the Anglo-Saxon warriors. They were originally the professional soldiers who made up the personal bodyguards of the kings and earls. The name huscarl literally means household man. Indeed, as well as being warriors, some huscarls performed administrative and legal functions similar to those of a modern magistrate. They were important and trusted servants of their masters. The depicted horseman, who was rather similar to the cavalryman of the Continent, is armed with a heavy battle-axe on a long shaft. His sword is of the spatha style (with a broad two-edged blade about 75 cm long). He wears a conical helmet with nasal, known as Spangenhelm, and a chain mail hauberk (a body armor tunic made of interlinked small metal rings).