THE JEWISH PROFILE OF FORMER CONVERSOS

On their own initiative, the “New Jews”—who had never previously tasted Jewish life as it was lived in a traditional society—established new frameworks to supply basic socialization for themselves and for those who would arrive in their wake. Of course they were assisted by veteran Jewish communities from other countries that were willing to extend a helping hand, and they even managed to gain significant support throughout the Sephardic Diaspora in the Ottoman Empire and Italy. They were strongly influenced by the Sephardic community in Venice, because until the 1630s Venice was the capital of the western Sephardic world, serving as a bridge between the European Jews and their brethren in the Levant.

Not only were most of the members of the western Sephardic Diaspora new to Judaism, but their special character as former conversos or the descendants of former conversos was also notable for generations in the Jewish profile of their communities. They were the first Jews in the early modern period who were forced to redefine their Jewish identity and mark its boundaries, and they could only do so with the intellectual tools they had acquired in their Christian socialization. Indeed, quite a few of them had received an excellent education in the best Iberian universities—Alcala de Henares, Salamanca, Valladolid, and Coimbra—and in Jesuit seminaries and monastery schools. The proportion of physicians among them was relatively high, and their theological and philosophical background was quite extensive. Paradoxically, these former conversos drew definitions of their Jewish identity and justification for acceptance of the yoke of Jewish law from Iberian neo-scholasticism, Jesuit pedagogy, and fideistic philosophy. Some of them advanced claims similar to those of the Catholic fideists, who sought to justify the unchallenged supremacy of the pope and the church tradition against the attacks of Protestants and early modern skeptics. In their own arguments against neo-Sadducees and neo-Karaites, who were gaining a following among the intellectual class of former conversos, these thinkers maintained that acceptance of the authority of the talmudic and rabbinic tradition was necessary to avoid plunging into the abyss of religious uncertainty. One such thinker was Isaac Orobio de Castro, a physician and philosopher who returned to Judaism in Amsterdam in 1662 and argued with Spinoza and with Juan de Prado after they were excommunicated by his community. Orobio de Castro regarded the Oral Law as the factor that could guide the Jewish believer, given the existence of uncertainty, because, he said, the human intellect is limited by its very nature and unable to gain unequivocal knowledge.

The new communities of the “Spanish and Portuguese Jewish Nation” did not ostensibly deviate from the framework established by halakhic Judaism over the generations; they explicitly declared their loyalty to the “faith of the Sages.” The syndics who led them claimed “supreme authority over all” (superioridade sobre tudo), but they consistently accepted the professional authority of the rabbis in halakhic matters. Yet, during the seventeenth century, fissures appeared in the traditional framework that the “New Jews” sought to define. Although officially they were committed to applying the principles of the halakhah in all matters, in the face of reality this application became quite partial and problematic. Their connection with halakhic norms became weak in various areas of life, notably, first of ah, in their extensive economic activities. An indication of this tendency is the almost complete lack of regulations on economic matters among the ordinances instituted by these communities during the seventeenth and eighteenth centuries. Moreover, questions on economic matters are hardly to be found in the responsa of their rabbis, which are not particularly impressive in any event. Among these Jews, religion was increasingly limited to ritual matters, Sabbath and holidays, and the synagogue. Secular activity expanded into the space left vacant after the scope of Jewish law was narrowed. However, since this impressive process took place unintentionally, without any public challenge, and in places where the rabbinical establishment was rather weak and subject to the domination of the Mahamad (the executive committee of syndics of the community), it failed to arouse stiff ideological resistance. 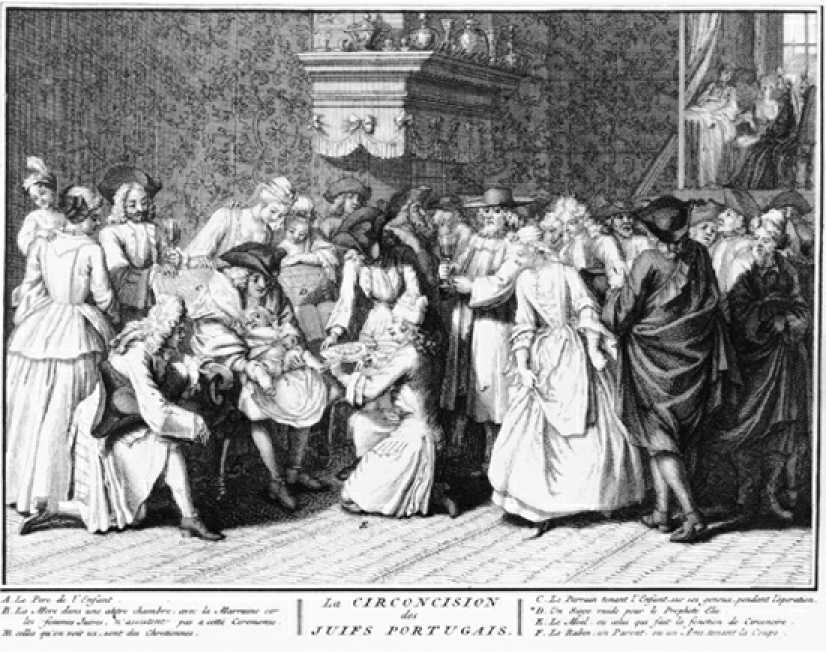 B. Picart, The Circumcision Ceremony of the Portuguese Jews, 1722. Engraving. The legend indicates (A) the father, (B) the mother and godmother in another room at upper right, (C) the godfather, holding the infant, (D) an empty seat for Elijah, (E) the mohel, and (F) a rabbi, relative, or friend holding the cup. (Jewish Historical Museum, Amsterdam; JHM 03966)

To a degree, the Sephardic Jews of western Europe can be seen as harbingers of the individualism that emerged in modern Jewish life. Since their Judaism was not self-evident, they had to fill it with new content and to determine its boundaries. Various alternatives were available to them in defining their Jewish identity. Many of them clung to the halakhic tradition with devotion and sometimes even with the fanaticism typical of penitents (in common speech those who were scrupulous in observing the commandments were known derisively as mitzvoteros), whereas others held critical, subversive, and antinomian views, thoroughly rejecting talmudic Judaism. Uriel da Costa, a converso from Porto who returned to Judaism in Hamburg around 1616, and who confronted the local Sephardic communities there and in Amsterdam, after rejecting the Oral Law and rabbinical authority, wrote an autobiographical work shortly before taking his own life in 1640. There he states:

I observed, that the customs and ordinances of the modern Jews were very different from those commanded by Moses. Now if the Law was to be strictly observed, according to the letter, as it expressly declares, it must be very unjustifiable in the Jewish doctors to add to it inventions of a quite contrary nature. This provoked me to oppose them openly, nay, I looked upon it as doing God service to defend the law with freedom against such innovations.5

Quite a few converses who returned to Judaism regarded it as a religion rather than an all-embracing way of life. Since they were used to experiencing their Judaism in secret, they became accustomed to distinguishing between inner, intimate religious reality and the outer way of life they had led in Spain and Portugal according to the values prevalent in the Iberian Christian world. When they returned to Judaism, some of them came to the conclusion, as it were, that spiritual identification with the tradition was more important than the punctilious observance of the T orah and the commandments—a version of the Iberian converso principle that faith in the law (and not necessarily its observance) promises life in the world to come. This view challenged rabbinical Judaism and opened the way for all kinds of individualistic interpretations of the Jewish tradition. Other former conversos were more radical and joined circles of atheists and libertines or of Christians who denied the confessional character of Christianity. The political and social atmosphere of the Dutch Republic created fertile ground for this trend: in the conditions of relative tolerance that prevailed there, the Jewish community lost part of its authority as a corporation, and its coercive power was blunted.

Spinoza, the son of conversos who returned to Judaism in Amsterdam, was excommunicated by the community there in 1656. Later to become one of the most influential philosophers in modern times, Spinoza not only opposed rabbinical authority and the idea that the Jews are the Chosen People but he also laid the foundations of biblical criticism. The ideas he expressed at the time of his excommunication were later developed in his Tractatus Theologico-Politicus (first published anonymously in 1670). Until his death in 1677, he remained outside of Judaism without converting to Christianity. Like quite a few chretiens sans Eglise in the Dutch Republic, he was unattached to any church or religious denomination, though he was very close to circles of collegiants, nonconformist Christians of a rationalistic bent, with whom he found much in common.

A fair number of Jews removed themselves from the community without any struggle or opposition—and many of them did so without converting. I n London this tendency was even more pronounced, because from the start the communal organization of the Sephardic Jews was not a corporation. The community was powerless to deal with Iberian conversos who retained their social connections with it but refused to be circumcised, so that their “Judaism” was, in their view, a matter of identity of interests with the ethnic group and nothing more. Wishing to imitate the lifestyle of the English gentry, some of the wealthiest among them moved to rural estates, far from the supervision of the community in London, and their attachment to Judaism weakened.

However, along with individualism, another phenomenon—that of ethnic awareness—is manifest in the western Sephardic Diaspora. The Sephardim did not refrain from offering financial and even political assistance to other groups of Jews in central and eastern Europe; nevertheless, their religious identity could not give full expression to their social identity. They regarded themselves as part of the Nacion (Nation), a vague concept that they used to signify the entire Iberian Jewish community, including the various groups of conversos and New Christians who remained in Spain and Portugal and their colonies. The Nacion, though it did not express nationalism as it developed later in Europe, was based on components of identity such as ethnicity, culture, language, and common fate, making it a precursor of a new development that became increasingly problematic in the modern period.

Despite the criticism in principle voiced by the Sephardic leaders against remaining in the “lands of idolatry” (the term they used for Spain, Portugal, their colonies, and, in general, Catholic countries where Jews were forbidden to live), these Jews continued to view the people of Jewish descent who remained there as an integral part of their ethnic group. Connections of family and business, history, and common cultural affinities strengthened the ties among the various parts of this Diaspora and sometimes even masked the differences and religious and ideological conflicts among them. Although the religious leadership never granted ideological legitimacy to members of the Nacion who remained, willingly or under duress, outside of Judaism, the Sephardic Jews of western Europe did accord them social legitimacy by maintaining connections with them in various areas and on different levels.

Thus a unique Diaspora emerged, whose past and Jewish origins were a common denominator, though not all its members were of the same faith and not all of them had a real connection with Judaism. In the historical context of early modern Europe, the ideological struggles among the various segments of this Diaspora and the connections and solidarity that existed within it were two sides of the same coin.