Russian-German Special Relations in the Twentieth Century: A Closed Chapter? 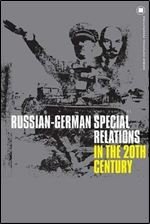 Twentieth-century Europe, especially Central Eastern Europe, has been largely defined by Russia and Germany. In this century, cultural and economic exchanges between the two countries were as active as the fires of hatred intense. The smaller states in between, with their unstable borders and internal minorities, suffered from the powers' alliances and their antagonisms.