The Atlanta and Savannah Campaigns, 1864 (The U.S. Army Campaigns of the Civil War) 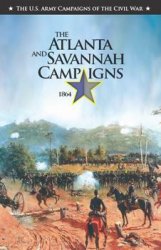 In 1864, as the Civil War entered its fourth year, the most devastating conflict in American history seemed to grind on with no end in sight. In order to break the stalemate, President Abraham Lincoln appointed Maj. Gen. Ulysses S. Grant general in chief of the U.S. Army and nominated him for promotion to lieutenant general, which Congress duly confirmed on 2 March. As the North’s most successful field commander, Grant had built his reputation in the Western Theater, which stretched from the Appalachian Mountains in the east to the Mississippi River in the west and from the Ohio River in the north to the Gulf of Mexico in the south. His impressive résumé included victories at Forts Henry and Donelson, Tennessee; Shiloh, Tennessee; Vicksburg, Mississippi; and Chattanooga, Tennessee. Before heading east to assume his new duties, Grant designated his most trusted subordinate, Maj. Gen. William T. Sherman, to succeed him as commander of the Military Division of the Mississippi, a sprawling geographic command that spanned most of the Western Theater.