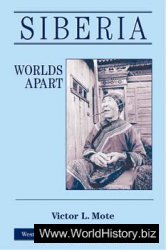 Author: Victor L. Mote
Siberia: Worlds Apart
Westview Press
1998
Format: pdf in rar
Size: 27.76 mb
Language: English
Known to most as a realm of exile and labor camps, Siberia is also one of the world’s wealthiest resource bases. This harsh, vast land constitutes nearly three-quarters of Russia’s territory, yet after four centuries of Slavic migration and procreation it is home to a mere 32 million people. In this comprehensive book, Victor Mote illuminates the dichotomy between Siberia’s rich treasure house of resources and its peripheral relationship to the rest of the world. With this paradox in mind, he traces the region’s history from the Stone Age to the present, emphasizing the unique blend of wit and will developed by inhabitants to survive one of the most brutal environments in the world - a land that has been part colony, part prison, and part frontier. Mote also explores the geography, ethnography, economics, and politics of Siberia and its people, providing a multidisciplinary perspective for scholars and general readers alike interested in Eurasia’s “forgotten quarter.”