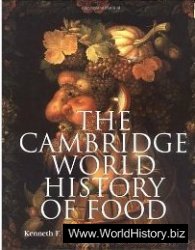 Have the French always enjoyed their renowned cuisine? When did Russians begin to eat pirogi? What was the first Indonesian spice to be cultivated elsewhere in the world? Questions such as these make for good Jeopardy material, but they're far from trivial--just ask anyone with a passion for good food and a curiosity for where that food originated. That person will know instinctively that the best way to approach a culture--and, indeed, the human animal--is through the stomach. For this individual, The Cambridge World History of Food will be something of a bible, and the best of gifts.

A massive scholarly tome in two volumes and more than 2,000 pages, the CWHF encompasses a wealth of learning that touches on nearly every aspect of human life. (It also reveals the answers to the three earlier questions: No, French cuisine as we know it is a 19th-century development; in the 16th century, following the conquest of the Volga Tatar; ginger, in colonial Mexico.) Thoroughly researched and highly accessible despite its formidable layout, the set addresses a groaning board of topics past and present, from the diet of prehistoric humans to the role of iron in combating disease; from the domestication of animals to the spread of once-isolated ethnic cuisines in a fast-globalizing world. Of greatest interest to general readers is its concluding section--a dictionary of the world's food plants, which gives brief accounts of items both common and exotic, from abalong to Zuttano avocado.

The product of seven years of research, writing, and editing on the part of more than 200 authors, The Cambridge World History of Food promises to become a standard reference for social scientists, economists, nutritionists, and other scholars--and for cooks and diners seeking to deepen their knowledge of the materials they use and consume. --Gregory McNamee