Genetics and the Mesolithic-Neolithic Transition in Europe

The question of whether changes in material culture seen in the archaeological record were the result of internal development by indigenous communities or the introduction of new practices by incoming people is one that lies at the heart of the debate over the spread of agriculture in Europe from its origins in the Near East. Again archaeological opinion was polarized into two opposing schools of thought, which could be formulated into two opposing, and testable hypotheses.

The Neolithic period in Europe is identified with the adoption of agriculture as the major subsistence base. There is no dispute that the domesticated plants and animals that form the foundation of farming originated in the Near East. But how did these domesticates reach Europe? Traditional explanations for the introduction of agriculture involved the concept of diffusionism whereby the spread of the new subsistence was facilitated by an accompanying spread of populations from the Near East. The incomers replaced the indigenous Mesolithic populations of Europe and radiocarbon dates for early farming sites seemed to confirm a gradual spread across Europe from the Near East. Ammerman and Cavalli-Sforza calculated that the spread of agriculture occurred at a uniform rate of 1 km per year (or 25 km per generation time of 25 years) and represented the colonization of Europe by demic diffusion from the Near East. This uniform rate of spread was called the ‘wave of advance’ hypothesis.

Ammerman and Cavalli-Sforza’s ‘wave of advance’ model for the spread of the Neolithic was first put forward in the 1970s. It was not until 1994 that Cavalli-Sforza et al. published gene frequency distribution maps that seemed to confirm the wave of advance hypothesis. The genetic data used were obtained from the examination of 95 protein and DNA polymorphisms in populations across Europe. This massive amount of data was summarized in the now famous Principal Components (PC) maps, the most important of which (in a statistical sense) showed a genetic gradient (or cline) from southeast to northwest Europe which was dated to the Mesolithic-Neolithic transition even though there is actually no method of assigning dates to the genetic distribution patterns revealed by PC Analysis. This first PC map (Figure 5) accounted for 27% of the variation in the genetic data; the second Principal Components map 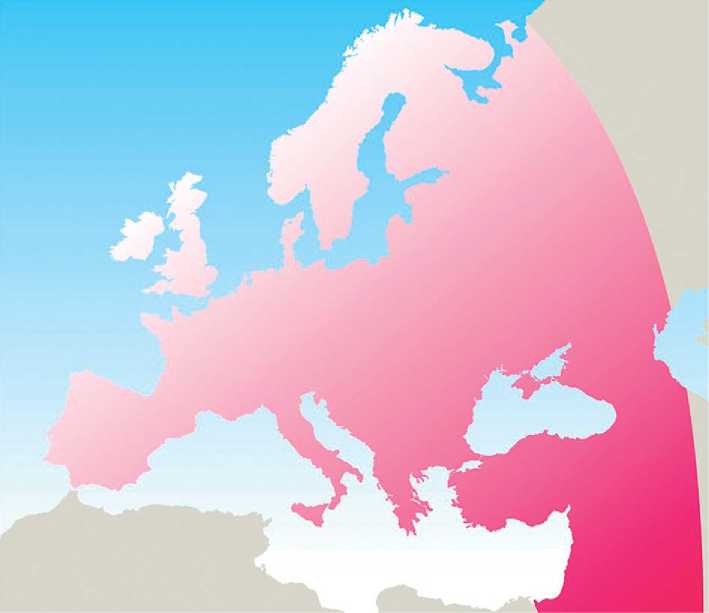 Figure 5 The first PC map showing a genetic gradient from the SE to the NW (darker shading to lighter) across Europe, interpreted as the spread of the Neolithic and agriculture by Cavalli-Sforza et al.

Accounted for 22% of the data and showed a genetic gradient from southwest to northeast for which there was no obvious archaeological explanation. The third PC map accounted for 11% of the data and was interpreted as resulting from the invasion of Bronze Age Kurgans, the fourth map was supposed to show Greek colonization in the Mediterranean. Each PC map was thought to represent a separate migration/ colonization event, and the larger the amount of data in each map, the older the event.

By the 1990s, diffusionism and population replacement had been rejected as the mechanisms for the spread of agriculture into Europe - instead the adoption of agriculture was seen as a result of gradual acculturation by the indigenous Mesolithic populations of Europe, hence known as indigenism. Although the domesticated plants were imported from the Near East, some suggested that animals such as cattle, pigs, and sheep were domesticated in Europe. The ‘pause’ in the spread of agriculture across Europe seen on the Carpathian plain and the ‘late’ adoption of agriculture by Mesolithic populations in Scandinavia and Britain was interpreted by Ian Hodder as due to the reluctance of these groups to change to this new subsistence base until they had themselves become ‘domesticated’ - the adoption of agriculture entailed different modes of thought about plants, animals, settlement, and landscape use. The social context for the adoption of agriculture was seen as having to change first. The genetics directly challenged the orthodox interpretation derived from archaeological research and the new theoretical stances used to reach these interpretations. The work of Cavalli-Sforza and colleagues was heavily criticized by archaeologists who felt that this account of the introduction of agriculture into Europe was not corroborated by the archaeological evidence - even that it harked back to the ‘old-fashioned’ explanations of culture change being due to ‘ex orientae lux’.

In 1996 Martin Richards and colleagues published an analysis of mtDNA haplogroups in European populations, which showed that the majority of mtDNA lineages were present in Europe from the end of the last Ice Age, and some even prior to that in the Upper Palaeolithic period (Figure 6). However 20-25% of present-day European mtDNA lineages originate in the Near East, such as haplogroups J and T1, so some demic diffusion must have occurred in the past, but how much could not be quantified. The mtDNA evidence was severely criticized by Cavalli-Sforza and colleagues on several grounds, for example sample size, and the fact the mtDNA is in effect a single genetic locus and thus cannot be as informative as the analysis of 95 loci. However, the overall difference between the

Figure 6 The 11 major European mtDNA haplogroups and their estimated time of origin. Only haplogroups J and T1 are associated with the Neolithic.

Two studies is not irreconcilable - the first PC map has been re-analyzed and now represents 23% of the data, while the Near Eastern mtDNA lineages in modern Europeans is about 10% of the total. So the female Neolithic contribution to modern Europeans ranges from 10% to 23%; as already seen above, most mtDNA haplogroups entered Europe in the Palaeolithic and Mesolithic periods.

Several archaeologists have grappled with the challenge presented by the new genetic evidence, for example, Renfrew, Zvelebil, and Pluciennik. The result of the genetics challenge to the orthodoxy of the Neolithization of Europe is that we have a much more nuanced understanding of the different processes that went on in different parts of Europe. Colonization is now seen as having played a part in some areas, such as Greece, the Balkans, and Iberia, and possibly Southeast Italy is another candidate. Robert Foley’s group have suggested that ‘empty spaces’, that is, regions with little or no Mesolithic occupancy may have been preferred by early farmers. So some population incursions may indeed account for the spread of agriculture in some regions.

In other regions more complex interactions between indigenous Mesolithic hunter-gatherers and incoming farmers can be recognized - Marek Zvelebil has written about the various types of interactions that can occur. In a detailed case study on the social context of agricultural adoption by gatherer-hunters, he suggested that hypergyny, the movement of women from one social group to another would be likely to take place from gatherer-hunter groups to farming groups. Recent strontium isotope studies by Alex Bentley on human remains from LBK settlements have shown that this was in fact happening. This is a good example of an archaeological hypothesis being supported by scientific data. The movement of women from gatherer-hunter groups into farming groups might help to partly explain the dominance of Palaeolithic and Mesolithic mtDNA haplogroups seen in European populations today, but the numbers of incoming Neolithic colonizers was probably not very high to begin with. In the long run their genetic contribution to the population of Europe may not have been as important as the technological and social changes they brought about.