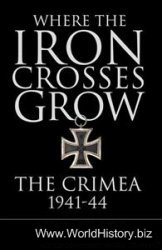 Author: Robert Forczyk
Where the Iron Crosses Grow: The Crimea 1941-44
Osprey Publishing
ISBN: 1782006257
2014
Format: EPUB
Size: 14,6 МБ
Language: English
Pages: 304
The Crimea has been the scene of conflict throughout its history. First occupied by the Russians in the 18th century it was the scene of the Crimean War, and was drawn into the Russian Civil War, as well as World War II. Today it remains a much disputed region with the Crimea at the center of ongoing tensions between East and West. Throughout World War II the Crimea was a microcosm of the more general war on the Eastern Front, reflecting the ebb and flow of fortunes of that conflict. It was a crucible that saw first Soviet and then German armies surrounded, overwhelmed, and then destroyed. The nature of the fighting in the Crimea was unusual for the Eastern Front, with naval forces playing an important role, as the Crimea’s position in the Black Sea gave rise to a major role for naval supply, amphibious landings, and, ultimately, evacuation. However, in other ways it was more characteristic of the Eastern Front, and the fighting for and occupation of the region saw the same level of atrocity and ethnic cleansing commonplace throughout the war in the East, with each side reaching the depths of barbarity in their treatment of the civilian population. Based on extensive new archival research, this incredible narrative history by acclaimed historian Robert Forczyk sheds new light on this vital aspect of the Eastern Front that has not been covered in English before.