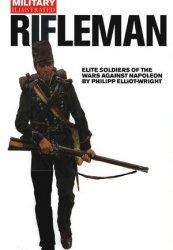 Rifleman: Elite Soldiers of the Napoleonic Wars (Classic Soldiers Series)
Author: Philipp Elliot-Wright
Combined Books
ISBN: 1903040027
2000
Pages: 140
Format: PDF
Size: 25.71МБ
Language: English
This series was created by Military Illustrated magazine, the leading monthly military history publication in the English language. It has built an unrivaled reputation for authoritative articles, primary research, rare photographs, and specially commissioned artwork.
Here is the story of one of the most effective soldiers of the past -- the Rifleman. The invention of the rifle gave a new twist to warfare. Hunters became soldiers who fought in green and hid behind cover, as did some of the earliest Riflemen in the forests of North America. Men such as these, in both Europe and America, revolutionized the art of war.
Using black-and-white and color illustrations, including a spectacular recreation of the Battle of Waterloo, this book explains how the Rifleman was trained to act independently and rely on his own skills, thus becoming the forefather of today's combat soldier.