The period from about 5000 to 3000 bce saw several, relatively simultaneous cultural expansions around the globe. Fishing and ultimately also whaling communities were setting up settlements along the Canadian Pacific coast. The mound-builders in the lower Mississippi River were developing an increasingly complex social organization. In the upper reaches of the Amazon River, potato and manioc were being intensively harvested and were soon to become an integral part of an emergent Peruvian culture. The period also saw the expansion of the Sahara Desert and the cultural separation of Mesopotamia from the sub-Sahara world. Mesopotamia, the Indus, China and toward the end, Egypt, were blossoming into complex village cultures with increasingly dense populations. But the most dramatic change occurred in Europe, where the agro-pastoral foundations that had been set in Mesopotamia were exported by farmer communities, whose impact on the landscape reached all the way to the Orkney Islands, the far northernmost tip of England. The push into Europe was a complex afi'air, but it can be simplified as having three basic routes, which will be important to remember in the following discussion (Figure 10.1). 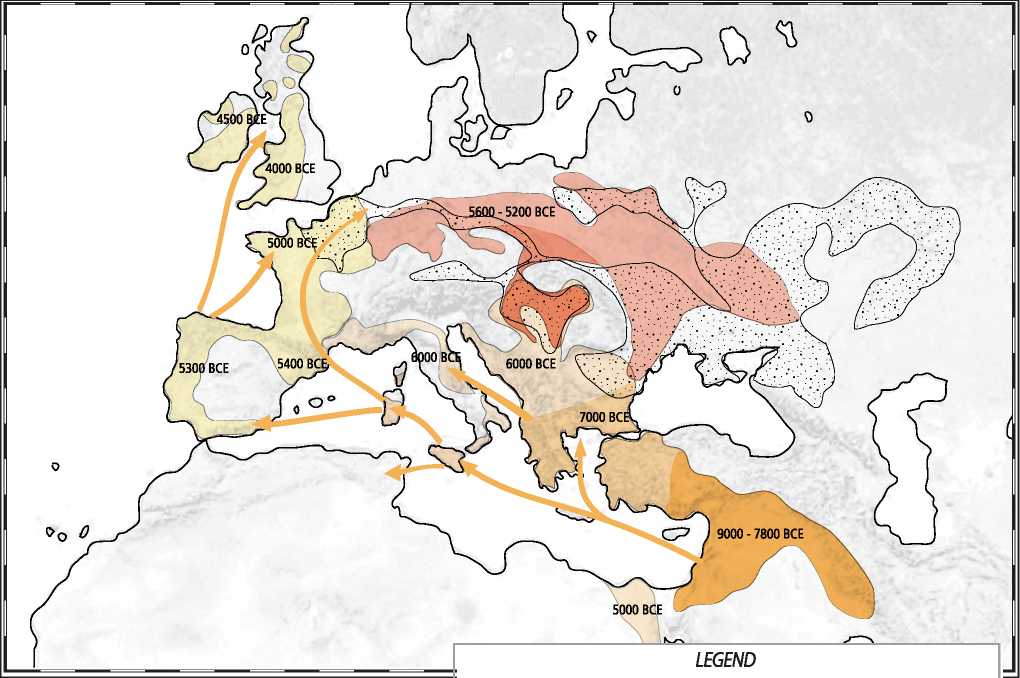 1.  Northward into Germany and into Scandinavia. These were cereal-farmer and miner cultures, which inhabited the Danube and Rhine basins since the late sixth millennium, using slash-and-burn techniques to replace forest with farmland pushing gradually north and west. They are the called Linear Ware or Longhouse culture after its pottery and architectural styles.

2.  Westward along the Mediterranean Sea to Spain and Portugal and then along the Atlantic. Known for the megalithic stone architecture, these cultures were engaged in herding and agriculture supplemented by hunting and fishing. They constructed impressive tombs and were in hostile competition with the remnants of the First Society people as well as with the forest-clearing farmer.

3.  Westward from the Russian steppe. The Kurgan society, which was primarily an animal herding culture, began to push into Europe, influencing societies directly or indirectly there as far west as England.

By the time of the Beaker culture (2400-1800 bce), named after their distinctive pottery, the various cultural vectors had more or less fused, so much so, in fact, that archaeologists cannot decide if the origins of this culture, which reached from Spain and Germany to England, were in Spain or in Eastern Europe. Needless to say, by that time, any aboriginal cultures had all but disappeared.

The first indicated route of expansion had its roots with the Vinca, an extraordinary culture in which aspects of herding, agriculture, salt mining, and metallurgy were all closely intertwined. It was the first such integrated economy in history. To the east, in the steppes, farming was difficult since the soil was hard to till and its aridity made plant growing difficult. But this area was hardly inactive. Its great advantage was, of course, the steppe, which could support cattle, goats, and sheep. The area quickly became a leading stock-breeding zone in the world.1 The management of a herd of cattle requires a fine-tuned mixture of bulls, steers, cows, and calves. At the least, yearly meetings among stock herders was necessary for breeders to make adjustments to their herd. Such yearly meets had been a part of the stock-herder life since the days of Nabta Paya, and are associated with ceremony, celebrations, and drinking, just as much as with haggling over animals. Farmers in Switzerland still today have such meets, bringing their animals from miles away and decorating them with flowers and bells. Metal played a significant role in the economy of the steppes, since the Ural Mountains were a major source of copper. Kargaly was mined already in the fifth millennium bce.

The two cultural vectors, one from the Balkans and the other from the Russian steppe, produced several hybrids such as the Lengyel culture (5000-3400 bce) located in the area of modern-day southern Moravia, western Slovakia, western Hungary, parts of southern Poland, and the Rossen culture (4600-4300 bce) that stretched into France. These people as they pushed northwestward entered an environment unlike anything they or their ancestors had previously encountered. It included vast deciduous forests, substantial mountain ranges, new species of wild plants and animals, new soil types, new climatic characteristics, and, of course, the indigenous First Society people. Avoiding the mountains and thick forests, the newcomers spread out in river valleys and along tributaries to the larger rivers, chopping down trees and clearing land for farms and pastures as they went.2 They were following the copper trail, so to speak, that connected the Carpathian Mountains in Romania with the Tatra Mountains in northern Czech Republic and southern Poland, to ore sites in southeastern Germany. Trade up and down the rivers began to flourish. Copper was exchanged for ornaments made of spondylus, a reddish, spiky mollusk that is harvested underwater in the Mediterranean. It was highly valued and fashioned into pendants and necklaces that can be found as far as northern Germany and France in tombs probably of clan leaders.3